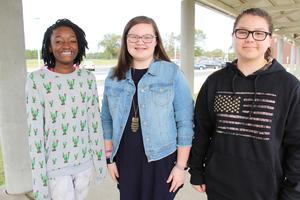 Three seventh grade students from B-L Middle School have been named as the VFW Essay Contest Winners for 2019.

Three seventh grade students from B-L Middle School have been named as the VFW Essay Contest Winners for 2019.  Congratulations to Jade Bovain (first place), Raimee Davis (second place) and Catalina Cruz (third place). This year, students had to write on the topic of “What Makes America Great.”  The essays, which were judged by a group of Lexington Three administrators, are one of many activities that take place in Lexington County School District Three annually around Veterans Day.  The winning essays can be read below. Please note that the essays are unedited.

America is a free, blessed country. It is a place where dreams come true and where anything is possible. Essentially this is what makes America so great. There is no limit to what is possible and what is not. This is substantially true in America. How come? Well, this is because of the freedom that has been given to American citizens.

The Bill of Rights gave citizens freedom along with The Fifteenth Amendment, which was ratified on February 3rd in 1870, and gave every American citizen the right to vote no matter what race they were. This is one of the things that makes America great. The Fifteenth Amendment gave men and women more freedom than ever before. With all of this freedom, it allowed the people of America to think outside of the box and set goals to achieve what is known to many, as the impossible. Americans have been given rules, these rules are established by the citizens themselves. We have been given the right to vote on what should be allowed and what should not. This is what makes it so impossible for someone to go anywhere without being surrounded by a role model. So many individuals are determined to succeed in life and not let their gift of freedom go to waste. It is individuals like Elaine Marie Welteroth and Milton Snavely Hershey that make America so great. Elaine Welteroth is the second youngest African American and the youngest Condé Nast associate to become editor-in-chief of the magazine Teen Vogue. Milton Hershey is an American who created the Hershey’s candy bar that all Americans know and love.

Elaine Welteroth and Milton Hershey are two completely different people, who were born at two completely different time periods, and accomplished two completely different purposes in their life but they have both made a tremendous impact in America. And it is not only them that has shown the endless possibilities of being American Citizens. Various people in the creative arts industry, humanitarian activists, public servants, teachers and more are all committed to showing the world how amazing our country is, and you do not have to be a celebrity to have an impact on America because freedom is what allows anyone to be heard. Our ability to dream freely and have an impact on the world is what makes America great.

Did you know that America is 243 years old? Yes, 243 years ago our Founding Fathers wanted to be free from the tyranny of Great Britain.   According to the Google dictionary, freedom is the power or right to act, think, or speak as one desires. Later in our country’s history, John F. Kennedy said “The great revolution in the history of man, past, present, and future is the revolution of those who determined to be free.”   For 243 years, America has been great because of freedom, military, and service-oriented people.

Some of the many people and qualities that helped make America great were our Founding Fathers and citizens. The men who wrote the Declaration of Independence granted us our freedom from Great Britain. The Bill of Rights was also created to ensure our freedom and protect us from an overpowering government. The first amendment of the Bill of Rights gives people freedom of speech, religion, and press.  Other people that contributed to America’s freedom were Martin Luther with his “I Have A Dream” speech and Abigail Adam’s as she served as the first First Lady and became a great supporter of Women’s Rights. Freedom makes America great.

America has people that join its military that are willing to go to foreign countries to fight for our freedom. As of September 2017, Google noted that the United States had 1.3 million active militaries and 800,000 in Reserved Forces. “ We must be free not because we claim it, but because we practice it (Unknown Author).”  Our military definitely makes America great.

Even though the country is only 243 years old, many characteristics make it great. From our forefathers to our military today, each contributed their own part. America is one of the few countries that protects its citizens’ freedoms and rights. America is the country of the brave and the free. America is a country where many want to be.

America is great for many reasons such as freedom and the people we have in the country. Freedom is a huge reason why America is so great. Many people from all over the world come to America looking for freedom. The idea is that America is a place full of unlimited freedom which is desirable and unbelievable to most people in other countries. In other foreign countries, citizens are not entitled to certain privileges. Another reason what makes America great is the people. American citizens make America even better. Many citizens do not realize how great America is.

There are many different types of freedom in America. The biggest example of freedom in America is freedom of choice. For example, every American has the right to a private life. We can love and marry who we want. In other countries, girls and boys do not have a choice in who they marry. Americans can choose to vote for their leaders. America has a democracy where the people have the power by voting. Also, another big freedom in America is freedom of religion. No one can tell you who to worship or to follow. Our freedom makes us who we are as Americans.

America has come a long way since this country was founded. Since being founded Americans have been through wars like World War One, terrorist attacks like 9/11, and natural disasters like Hurricane Dorian. But through all of those things, Americans have stood strong and courageous. Americans are courageous because we stand together and support one another, we fight wars and get up to go to work or school every morning. American people are just great.

There are so many reasons that make America great, but I feel that freedom and American citizens are what make America better. America is so much more than what people can imagine. We have limitless possibilities here. This is why I believe America is the greatest country in the world.