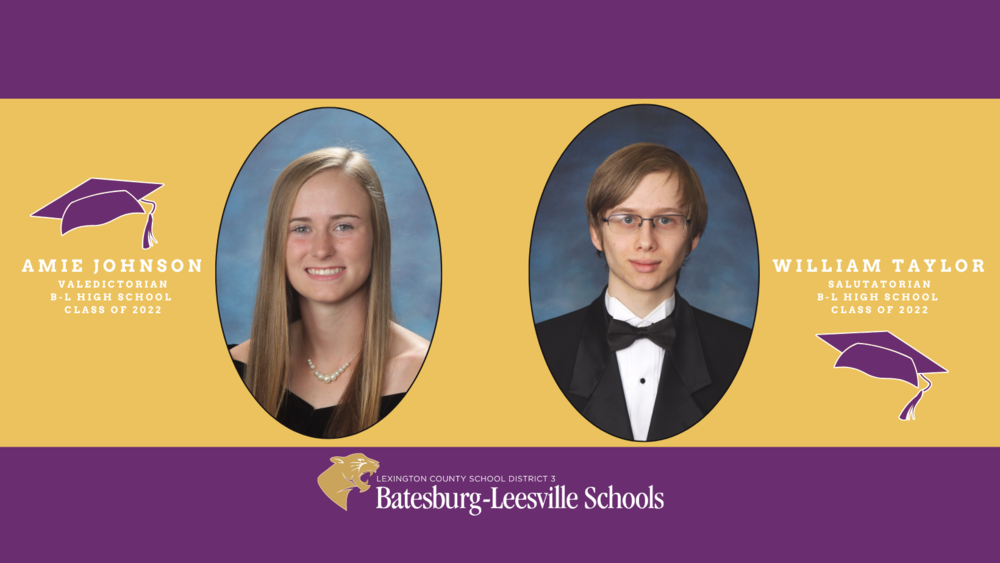 Valedictorian and Salutatorian Announced for the Class of 2022

On Tuesday, May 24th, the B-L High School Class of 2022 was recognized and honored with a special awards program at the Lexington Three Fine Arts Center.

Amie Johnson was officially named as the Valedictorian of her class, ending her academic career with a cumulative Grade Point Average (GPA) of 5.348. She completed 20 dual enrollment courses and 13 honors courses during her time at B-L High School.

William Taylor was also named Salutatorian, ranking second highest academically in the senior class with a cumulative GPA of 5.265. William took 20 dual enrollment courses and 16 honors courses while at BLHS.

In addition, congratulations to the following students for completing their high school educational careers with a GPA of 3.95 or higher, thus earning themselves the designation of honor graduate:

The Senior Awards Program was also attended by representatives from numerous community organizations who presented scholarships to members of the graduating class. In addition, seniors were also recognized for being a member of the Beta Club, being an AVID Program completer, being a CATE completer, and being a member of the Student Council, just to name a few of the other accolades.

B-L High School's 102nd annual Commencement Ceremony is slated to be held on Thursday, May 26th at 7 pm in the Fine Arts Center. Individuals with tickets will be admitted into the Fine Arts Center on Thursday evening. (A ticket is required for admittance for all attendees regardless of age.) Those without tickets can view the ceremony from inside the school gymnasium via a live-feed. In addition, the ceremony will be streamed live on Lexington County School District Three’s YouTube channel, which can be found at the following URL: https://www.youtube.com/c/LexingtonCountySchoolDistrictThree.

Lexington County School District Three congratulates all of the members of the 2022 senior class on their accomplishments and wishes them the absolute best as they pursue their future endeavors.